The military invasion of the Gaza Strip by Israeli Forces bears a direct relation to the control and ownership of strategic offshore gas reserves.

This is a war of conquest. Discovered in 2000, there are extensive gas reserves off the Gaza coastline.

British Gas (BG Group) and its partner, the Athens based Consolidated Contractors International Company (CCC) owned by Lebanon's Sabbagh and Koury families, were granted oil and gas exploration rights in a 25 year agreement signed in November 1999 with the Palestinian Authority.

The BG licence covers the entire Gazan offshore marine area, which is contiguous to several Israeli offshore gas facilities. (See Map below). It should be noted that 60 percent of the gas reserves along the Gaza-Israel coastline belong to Palestine.

The BG Group drilled two wells in 2000: Gaza Marine-1 and Gaza Marine-2. Reserves are estimated by British Gas to be of the order of 1.4 trillion cubic feet, valued at approximately 4 billion dollars. These are the figures made public by British Gas. The size of Palestine's gas reserves could be much larger. 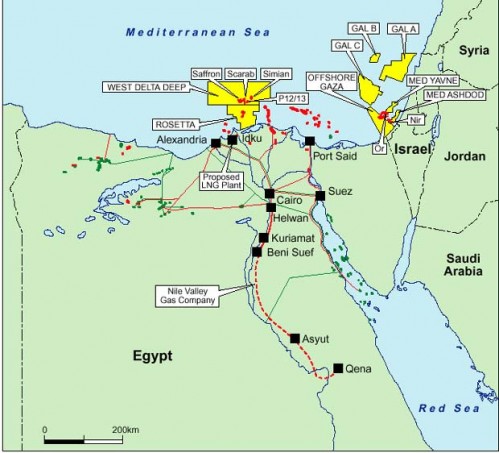 Who Owns the Gas Fields

The issue of sovereignty over Gaza's gas fields is crucial. From a legal standpoint, the gas reserves belong to Palestine.

The death of Yasser Arafat, the election of the Hamas government and the ruin of the Palestinian Authority have enabled Israel to establish de facto control over Gaza's offshore gas reserves.

British Gas (BG Group) has been dealing with the Tel Aviv government. In turn, the Hamas government has been bypassed in regards to exploration and development rights over the gas fields.

The election of Prime Minister Ariel Sharon in 2001 was a major turning point. Palestine's sovereignty over the offshore gas fields was challenged in the Israeli Supreme Court. Sharon stated unequivocally that "Israel would never buy gas from Palestine" intimating that Gaza's offshore gas reserves belong to Israel.

In 2003, Ariel Sharon, vetoed an initial deal, which would allow British Gas to supply Israel with natural gas from Gaza's offshore wells. (The Independent, August 19, 2003)

The election victory of Hamas in 2006 was conducive to the demise of the Palestinian Authority, which became confined to the West Bank, under the proxy regime of Mahmoud Abbas.

In 2006, British Gas "was close to signing a deal to pump the gas to Egypt." (Times, May, 23, 2007). According to reports, British Prime Minister Tony Blair intervened on behalf of Israel with a view to shunting the agreement with Egypt.

The following year, in May 2007, the Israeli Cabinet approved a proposal by Prime Minister Ehud Olmert  "to buy gas from the Palestinian Authority." The proposed contract was for $4 billion, with profits of the order of $2 billion of which one billion was to go the Palestinians.

Tel Aviv, however, had no intention on sharing the revenues with Palestine. An Israeli team of negotiators was set up by the Israeli Cabinet to thrash out a deal with the BG Group, bypassing both the Hamas government and the Palestinian Authority:

"Israeli defence authorities want the Palestinians to be paid in goods and services and insist that no money go to the Hamas-controlled Government." (Ibid, emphasis added)

The objective was essentially to nullify the contract signed in 1999 between the BG Group and the Palestinian Authority under Yasser Arafat.

Under the proposed 2007 agreement with BG, Palestinian gas from Gaza's offshore wells was to be channeled by an undersea pipeline to the Israeli seaport of Ashkelon, thereby transferring control over the sale of the natural gas to Israel.

The deal fell through. The negotiations were suspended:

Israel's intent was to foreclose the possibility that royalties be paid to the Palestinians. In December 2007, The BG Group withdrew from the negotiations with Israel and in January 2008 they closed their office in Israel.(BG website).

Invasion Plan on The Drawing Board

The invasion plan of the Gaza Strip under "Operation Cast Lead" was set in motion in June 2008, according to Israeli military sources:

"Sources in the defense establishment said Defense Minister Ehud Barak instructed the Israel Defense Forces to prepare for the operation over six months ago [June or before June] , even as Israel was beginning to negotiate a ceasefire agreement with Hamas."(Barak Ravid, Operation "Cast Lead": Israeli Air Force strike followed months of planning, Haaretz, December 27, 2008)

That very same month, the Israeli authorities contacted British Gas, with a view to resuming crucial negotiations pertaining to the purchase of Gaza's natural gas:

The sources added that BG has not yet officially responded to Israel's request, but that company executives would probably come to Israel in a few weeks to hold talks with government officials." (Globes online- Israel's Business Arena, June 23, 2008)

The decision to speed up negotiations with British Gas (BG Group) coincided, chronologically, with the planning of the invasion of Gaza initiated in June. It would appear that Israel was anxious to reach an agreement with the BG Group prior to the invasion, which was already in an advanced planning stage.

Moreover, these negotiations with British Gas were conducted by the Ehud Olmert government with the knowledge that a military invasion was on the drawing board. In all likelihood, a new "post war" political-territorial arrangement for the Gaza strip was also being contemplated by the Israeli government.

In fact, negotiations between British Gas and Israeli officials were ongoing in October 2008, 2-3 months prior to the commencement of the bombings on December 27th.

In November 2008, the Israeli Ministry of Finance and the Ministry of National Infrastructures instructed Israel Electric Corporation (IEC) to enter into negotiations with British Gas, on the purchase of natural gas from the BG's offshore concession in Gaza. (Globes, November 13, 2008)

"Ministry of Finance director general Yarom Ariav and Ministry of National Infrastructures director general Hezi Kugler wrote to IEC CEO Amos Lasker recently, informing him of the government's decision to allow negotiations to go forward, in line with the framework proposal it approved earlier this year.

The IEC board, headed by chairman Moti Friedman, approved the principles of the framework proposal a few weeks ago. The talks with BG Group will begin once the board approves the exemption from a tender." (Globes Nov. 13, 2008)

The military occupation of Gaza is intent upon transferring the sovereignty of the gas fields to Israel in violation of international law.

What can we expect in the wake of the invasion?

What is the intent of Israel with regard to Palestine's Natural Gas reserves?

A new territorial arrangement, with the stationing of Israeli and/or "peacekeeping" troops?

The militarization of the entire Gaza coastline, which is strategic for Israel?

The outright confiscation of Palestinian gas fields and the unilateral declaration of Israeli sovereignty over Gaza's maritime areas?

If this were to occur, the Gaza gas fields would be integrated into Israel's offshore installations, which are contiguous to those of the Gaza Strip. (See Map 1 above).

These various offshore installations are also linked up to Israel's energy transport corridor, extending from the port of Eilat, which is an oil pipeline terminal, on the Red Sea to the seaport - pipeline terminal at Ashkelon, and northwards to Haifa, and eventually linking up through a proposed Israeli-Turkish pipeline with the Turkish port of Ceyhan.

Ceyhan is the terminal of the Baku, Tblisi Ceyhan Trans Caspian pipeline. "What is envisaged is to link the BTC pipeline to the Trans-Israel Eilat-Ashkelon pipeline, also known as Israel's Tipline." (See Michel Chossudovsky, The War on Lebanon and the Battle for Oil, Global Research, July 23, 2006)

In this new and expanded edition of Michel Chossudovsky's 2002 best seller, the author blows away the smokescreen put up by the mainstream media, that 9/11 was an attack on America by "Islamic terrorists".  Through meticulous research, the author uncovers a military-intelligence ploy behind the September 11 attacks, and the cover-up and complicity of key members of the Bush Administration.

The expanded edition, which includes twelve new chapters focuses on the use of 9/11 as a pretext for the invasion and illegal occupation of Iraq, the militarisation of justice and law enforcement and the repeal of democracy.

According to Chossudovsky, the  "war on terrorism" is a complete fabrication based on the illusion that one man, Osama bin Laden, outwitted the $40 billion-a-year American intelligence apparatus. The "war on terrorism" is a war of conquest. Globalisation is the final march to the "New World Order", dominated by Wall Street and the U.S. military-industrial complex.

September 11, 2001 provides a justification for waging a war without borders. Washington's agenda consists in extending the frontiers of the American Empire to facilitate complete U.S. corporate control, while installing within America the institutions of the Homeland Security State.